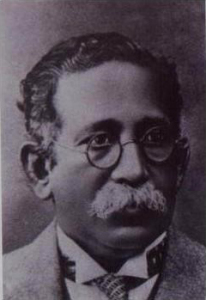 Samuel Chelliah Paul was born on the 28th of February 1872 in Uduvil, Jaffna where his father William Thiliampalam Paul was a general practitioner of medicine. He received his education at the Central College, Jaffna and then Wesley College, Colombo. He then proceeded to Presidency College, Madras and qualified with M.B.B.Ch. being placed first in the class with the distinction of winning the Johnstone Medal of the College. During his five years in the College he was awarded 14 Certificates of Honours, the George Smith Prize in Pathology.
He returned to the country and took up his first appointment as the House Surgeon to Dr. John Rockwood as the Colombo General Hospital.

He left for London in early 1900 and entered the King’s College Hospital and King’s College as a post graduate student and qualified with M.R.C.S and L.R.C.P. only after two months in England. In 1901 he became a fellow of the Royal College of Surgeons of England, the first Ceylonese to hold fellowship of this eminent fraternity.

On his return to the country, Dr. Paul was appointed Lecturer in Anatomy to the Ceylon Medical College and three years he was appointed first acting surgeon to the Hospital. He obtained M.D. Madras that same year. As a surgical luminary in the country he contributed immensely to the field by way of a myriad of publications and introduction of new techniques in an era where surgical gloves and masks were still unused and X-rays were still in its infancy. He has the reputation of a dexterous, resolute surgeon who was also a brilliantly skilled obstetrician.

Dr. Paul joined the Ceylon Medical Corps, a voluntary organization founded in 1881, as a second lieutenant and rose up its ranks to take command of the Corpse as Lieutenant Colonel from 1923-1927.

Dr. Paul was a musician and an ardent admirer of historic literature. He took the seat at the organ in the Anglican Church during his spare time and the flow of his pen yielded many publications in the Ceylon Brach of the Asiatic Society. He possessed what most men envied, a striking personality and built with geniality and serenity that put all others at ease. He passed away in 1942, having lived a full life of 70 years and gracefully having etched his legacy into the history of Sri Lanka.

1985 – Surgical management of tumours of the pituitary gland current progress and challanges for the future in Sri Lanka – Dr. S.H. Sellahewa