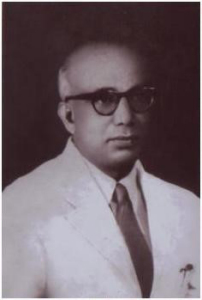 Dr. Edmund Medonza Wijerama was born on 6th August 1896. He hailed from the southern city of Kosgoda and received his education at the Rajapakse College and later on at the Royal College in Colombo. He entered the Ceylon Medical College in 1916 and qualified with Licentiate to Practice Medicine and Surgery (Ceylon) in 1922. He completed his internship at the Colombo General Hospital and served as District Medical Assistant, Avissawella for a short duration before returning to the Colombo General Hospital as a Medical Registrar. Subsequently he proceeded to complete his post-graduate studies at the University College Hospital, London.

Upon completion of his postgraduate training he returned to Ceylon and was put in-charge of teaching students pre-clinical subjects as well as clinical teaching. He served as the Pathologist, General Hospital, Colombo for a brief period. In 1935, armed with both M.D and M.R.C.P. (Lond) he was appointed Consulting Physician, General Hospital, Colombo, a post he held till his retirement in 1956.

He took an intense interest in medico-social activities in the country and actively participated and steered the affairs of the Ceylon Branch of the British Medical Association (now the SLMA). He served as the President of the Association in 1947-1948. The SLMA lived a nomadic life for almost 80 years till Dr. Wijerama and his wife graciously gifted their magnificent residence, where he lived and practiced for years to the Association in 1964. His magnanimous gesture was appreciated and recognized by naming the McCarthy road, on which the house was located after him as the “Wijerama Mawatha” during his lifetime. Even today, the “Wijerama House” at No 06, Wijerama Mawatha, Colombo 07 houses the SLMA office and the Ceylon Medical Library (now the Sri Lanka Medical Library) and it personifies the extraordinary contribution of this singular medical personality to the betterment of the profession.

He was also an active member of the Government Medical Officers Association (GMOA), which was also in its formative years at the time. He remained an active member of the GMOA and later became its president. He was a member of the Ceylon Medical Council and later its President, contributing immensely to advancement of medical ethics and etiquette in the country. He was a physician of outstanding caliber who took much interest in medical education, both undergraduate and postgraduate. He was a member of the University Court for several years and was conferred the Doctorate of Science by the University of Jaffna in recognition of his service to medical education in the country.

Dr. Wijerama was a great historian and a philanthropist. He gave back to the society unostentatiously and generously. He was an active member of the Committee of Management of the Royal College, his alma mater and passionate Buddhist worker. He contributed greatly to the expansion of the Y.M.B.A. Colombo in which he was a member of the Board of Management for many years.

He was a man who practiced what he preached, a medical educationist who fashioned the future generations of the profession and a humanitarian whose acts of munificence extended beyond the boundaries of any professional, religious or racial confinements. He passed away in December 1980 at the age of 84, leaving behind a legacy that still lives on and ripples through the lives of all those who pass through the doors of the “Wijerama House”.

2014 – “Protect the Values of a Noble Profession” – Dr Preethi Wijegoonewardene

2009 – Road Traffic Accidents and Deaths; They are not doing anything about it – Deshamanya Professor A H Sheriffdeen, Emeritus Professor of Surgery, University of Colombo

2007 – Bioethics in the 21st century: responding to the challenge – Prof Anoja Fernando, Senior Professor of Pharmacology, Faculty of Medicine, University of Ruhuna, Galle.

2005 – Reflections on changes in the Medical scenario in Sri Lanka in the past half century. Dr Dennis J Aloysius, Family Physician and Past President SLMA.

2000 – Epilepsy out of the shadows: experience in Sri Lanka over two decades – Prof. Nimal Senanayake, Senior Professor of Medicine, Faculty of Medicine, University of Peradeniya.