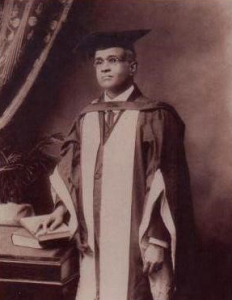 Murugesar Sinnetamby was born on 4th July, 1859 in Jaffna. He graduated from the Ceylon Medical College and received license to practice medicine and surgery in Ceylon in 1882, following, which he served as a supernumerary assistant surgeon for the colonial medical service for seven years. Thereafter he traveled to Edinburgh and secured the Fellowship of the Royal College of Surgeons in 1890, becoming the first Ceylon doctor to do so, a distinction he shared with Dr. A. B. Santiago who was admitted to the Fellowship at the same occasion. Within one year of arriving at Edinburgh, he obtained Conjoint diplomas of both Edinburgh and Glasgow and the Doctorate of Medicine of the University of Brussels.

Upon his return to Ceylon in 1890, he was appointed the Deputy Assistant Colonial Surgeon. Over the years he turned his attention more and more towards obstetrics and in 1899, at the age of forty he became the Superintendent of the De Soysa Lying-in-Home. He held this position for 20 years until his retirement and it was with his vision and untiring efforts that the De Soysa Hospital acquired it’s reputation for being a premier institution in maternal care in the country. Dr. Sinnetamby was a skilled obstetrician who generously extended personal devotion and kindness to all his patients.  He was an outstanding teacher and an examiner in obstetrics and the Council of the Medical College in Ceylon conferred him an Emeritus Professor of Obstetrics on his retirement.

Dr. Sinnetamby was an instrumental member of the medical fraternity that established the Ceylon Branch of the British Medical Association and held the posts of council member, secretary, treasurer, editor of it’s journal and the vice-president. He was elected the President of the Association in 1908 and held office for 3 years.

He lived righteously with a strong sense of duty, an unswerving conscience and resilient religious convictions.  He was a philanthropist and an aficionado of both science and arts. He died of a coronary thrombosis in 1920 at the age of 61, while conducting a forceps delivery at Panadura with the assistance of his son Dr. Veera Sinnetamby. This fitting end stands testimony to the life lived by Dr. Murugesar Sinnetamby,  a passionate advocate of continuing education who dedicated a greater part of his life to provide the best possible care for the patients who took to him and set lofty standards of service and conduct for all those who followed him; who played his full part to the community with exceptional modesty and morality to support out own profession and further the knowledge and practice of medicine.

1970 – Vaginal hysterectomy and repair – a study of 1000 cases – Prof. D.A.Ranasinghe, Department of Obstetrics and Gynaecology, University of Ceylon, Colombo Campus.