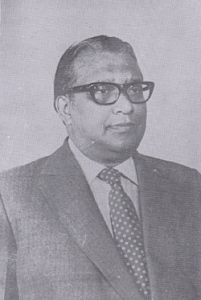 Born on 25th January 1926, N. D. W. Lionel has his early education at the Sr. Joseph’s College, Colombo and entered the Medical College of University of Ceylon in 1947. He graduated with MBBS in 1953 with honours and joined the Department of Medical and Sanitary Services (now the Department of Health) with a posting at the Chest Hospital, Welisara. After a short period there, he came to the General Hospital, Colombo for his clinical training and in 1955, he joined the Department of Pharmacology Faculty of Medicine, Colombo as a demonstrator. Once year later he was appointed lecturer and proceeded to specialize in clinical pharmacology in the United Kingdom in 1959. He obtained his MRCP (Edinburg) offering clinical pharmacology as the special subject and completed his training at the University College Hospital, London where he was a honorary clinical assistant.

Prof. Lionel returned to Sri Lanka in 1961 and was appointed Senior lecturer. In 1969, he won a WHO fellowship and left for UK again and several international publications ensued from his groundbreaking work on clinical trials during this period. Over the years he established himself as a clinical pharmacologist par excellence who was much sought after and summoned by national and international organizations for his colossal knowledge and experience in the field of pharmacology. He participated in and chaired many international forums on multiple issues, in difference countries across the globe. He was a member of the WHO Expert panel on Drug Evaluation and was the rapporteur of the momentous meeting on “Selection of essential drugs”, held in Geneva in 1977 which recommended a list of essential drugs specially to developing countries and created much interest and evoked comments worldwide. Many international organizations drew from the extraordinary proficiency of Prof. Lionel. Amid numerous such commitments were being an Honorary Adviser to Roche Far East Research Foundation, Hong Kong and the Indian Ocean Region Representative of the Medical Publication Sub-committee of the International Planned Parenthood Federation, London. He also contributed chapters in leading books on drugs on invitation.

He was a member of the National Formulary Committee as well as the Director of the State Pharmaceutical Corporation. He was a pioneer in the field of clinical trials in the country and guided many junior doctors in the field of research. Prof. Lionel was the Editor of the Ceylon Medical Journal, a post he held for 10 years contributing immensely to its advancement and the Formulary Notes (now published as the Prescriber) was another publication he nurtured with much care. With his involvement through the university, the national key organizations, the research institutes and his publications Prof. Lionel single handedly steered every sphere of pharmaceutical activity in Sri Lanka towards greater heights. He was made Associate Professor of Pharmacology in 1970 and in 1979 he was appointed Professor of Pharmacology by merit.

Among his many distinctions he held office as the President in several national professional organizations including the Sri Lanka Medical Association, Medical Library, Ceylon College of Physicians, Section A of the Sri Lanka Association for the Advancement of Science. The auditorium of the SLMA at the “Wijerama house” was named after his in recognition of his remarkable contribution to the medical profession and the field of pharmacology in the country. His academic excellence was recognized globally and he was elected Fellow of the Royal College of Physicians of Edinburg, Ceylon College of Physicians and National Academy of Science of Sri Lanka, Honorary Fellow of Sri Lanka College of Anaesthesiologist of Sri Lanka and member of the British Pharmacological Society. He was an enthusiast in research in Ayurveda and was a member of the Research Council of the Bandaranaike Memorial Ayurvedic Research Institute and the Board of Trustees of the Oriental Medical Science Fund.

Prof N D W Lionel passed way on 29th August 1982 at the age of 56. He was a brilliant medical luminary, who reached the top not only in the realm of pharmacology but also in all disciplines, professional and otherwise. The heritage he left behind is of an internationally reputed pharmacologist, who was above all delightful human being, with unparalleled humility and bonhomie as well as intellectual magnetism.